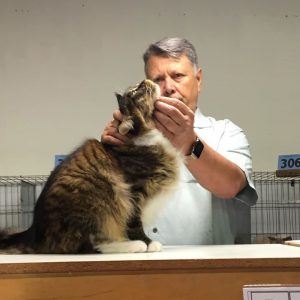 We are coping like everyone in the world and doing pretty good. Our cat fancy came to an abrupt halt when CoVid19 was recognized as a global pandemic. To keep our cat fancy family involved, virtual cat shows have been keeping us focused on each other and our beloved cats.

With the abrupt shutdown of our hobby because of safety issues, like many judges, I had contracts into 2021 and the immediate issue was canceling flights when confirmation came about contract cancelations. All in all, I had airfares from March 12, 2020 through April 2021, that had to be cancelled or rolled over to future dates. Clubs  in an attempt to salvage expenses paid attempted to push their show dates into the future. I had two shows rescheduled from March and May to August and September 2020. The August show cancelled last week and now I am planning the September date.

I have been judging since 1985. This is the first world event that has so drastically halted life in my career. As I am both a judge and an exhibitor, I have been having withdrawal symptoms as March and April were usually busy times for cat fanciers. Not only did travel halt for cat shows, life halted….my gym was closed, our church was closed, movie houses are closed, public sport and entertainment events were cancelled. I’m sure everyone has their favorite activities that halted or were radically changed and we will have plenty to share when life gets back to normal. What will be the new normal?

“I have taken up a new hobby. I
am teaching myself to knit. I am
currently learning on woolen
socks. My mom and my aunts
were master seamstresses and
also crocheted and knitted. I’m
following their lead in their
memory.” 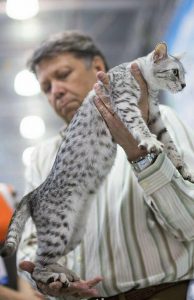 Virtual Cat Shows have been a topic since the 1980’s. Because cat fanciers always want to compete and find out what others think of their cats, in addition to in person cat shows, some of us participated in Virtual Cat Shows to explore a different approach to evaluating our cats. This never really took off because there were so many opportunities to physically participate with your cats and judges could handle and evaluate in the normal way.

So when faced with the absence of our many cat shows, the virtual cat show got a second look. We all wanted to reach out and find out how everyone was doing and we wanted also to keep interest for the cat fancy. So TICA had many members that formed a committee and came up with the concept of creating the virtual experience.

I have participated in 3 shows so far and Serbia will be my one of my upcoming events. Not only has this brought life back to our cat fancy and kept us together, it has also been a way of raising funds for charity. Some clubs lost money on shows that were cancelled at the last minute in March as civic events were restricted for health reasons. Others have benefited like cat rescues and shelters became targets for cat fanciers to support during this pandemic. A lot of good has come from this activity.

Don’t get me wrong, these virtual shows are a lot of fun and are a cool substitute for our physical shows BUT in no way does a photo replace the hands on evaluation of a cat. One of the stipulations of all these virtual cat shows is there is NO title accumulation or points for regional or international scoring. This doesn’t mean that cat photos and videos won’t one day become a reality, its just that at this time no organization is structured to offer traditional titles and awards to cats judged in these conceptual shows. But, a pretty cat is pretty in person and glamorous in photos!

It has always been a process to become the expert in any hobby or profession. When I started showing cats, I quickly realized this was something that I liked. I have had cats since childhood and my first experience at a show as an exhibitor was “Wow” because all of a sudden I was surrounded by people that liked cats as much as I did! What a concept!

So exhibiting led to clerking (stewarding) and then I started a club with my mentors and produced cats shows in my hometown. Evangeline Country Cat Fanciers was my club and we put on shows for 40 years. I finally retired the club in 2019.

All of this experience supported me in applying into the judging program with TICA. I was 10 years as an exhibitor before I considered entering the program and it was only because my mentors thought I would be a good judge. So, to do this, it would take a lot of time and money. I was lucky that most cat shows were on weekends. It was nothing for me to get off work at 5 pm on a Friday and drive 6-10 hours to get to a cat show! After all, I was a young professional and weekends were for ME!

So I didn’t look at it as giving up anything…it was something I enjoyed doing on the weekends and that was fine with me.

As I said earlier, I have had a cat since I was a child. My aunt had a “Siamese” cat that lived inside and outside. Nature intervened and she had a litter of kittens with a neighborhood tomcat and she had a blue point kitten that looked just like her. My aunt’s cat was named Gypsy and my kitten was named MewMew. (I was 4 years old)

MewMew lived with me till I was in high school. She was my first pet to mourn when she died.

So…in college I lived on my own and went to a party where the most beautiful seal point Siamese lived. I asked the hostess where she got her cat and she said it came from her mother who was a breeder. I met her, she worked as a chemist, and got my second Siamese from her. The kitten was a blue point (like my first) and she was named Sam.

I went on to breed Siamese as my chemist friend became a close friend who also liked cats her whole life. We ended up traveling to shows together and my program lasted for 20 years. I concentrated on tabby pointed Siamese. Later I added Oriental Shorthair to the program as my chemist friend brought one back from England.

Our last two female cats will each have a litter and our breeding program will officially be retired. Of course, if there is a kitten….

My “job” has always been as a Registered Nurse and I have always worked in hospital. My “hobby” has always been weekend travel and my wife has come to the shows she liked. We have traveled around the world with the cats. And it is only possible as I have always had breeding partners that were able to care for the cats while I was away at shows.

I am a retired Registered Nurse. My educational background is masters prepared in nursing and business. 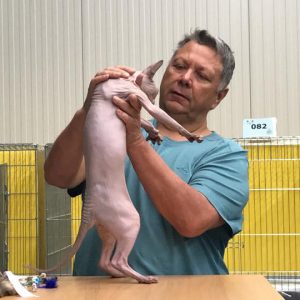 I was first licensed in 1985. So this year is my 35th as a judge for TICA. This has never been a job for me. It has been much more than that! I have made lasting friendships on every continent. I get to see many friends because many shows have had me judge their shows year after year. Family is more descriptive of my life in cats.

I grew up the oldest of 6 children and was raised to be independent and successful. It was just expected. 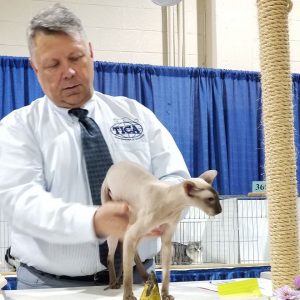 Dogs have owners; cats have staff!!! I love this saying and anyone that has ever lived with a cat understands. Cats are independent and smart. I’m not a snob as I also have had pure bred championship dogs. Cats do not have to be leashed to exercise outside the house. Cats use their own “toilets” and make very few mistakes. Cats share space in our many different home situations whether a 400 square foot apartment or a large home. These are the reasons I believe cats have become preferred over dogs.

These bobcats are fascinating. They live all over North America. One time, we had a cat show in Jackson, Mississippi. It was a small show and I barbecued for all the attendees. On Saturday morning, a man walked into the show hall with a bobcat on a chain leash.

These animals are magnificent in the wild and are not endangered. My good friend lives on Puget Sound in the Great Northwest and was walking here daily path for exercise and was confronted with a beautiful bobcat crossing her path. The bobcat was highly rufussed which is different from our Louisiana bobcat which is more sandy colored.

Teaching hasn’t changed except for new show rules or new standards or new breeds. But the process has always been the same. It is a pleasure being a teaching and training judge as our future depends on having competent judges for the cat fancy to continue. I hope I have contributed to that outcome!

Be true to the evaluation of the breeds. We are the caretakers of our breeds. We insure the cats are healthy and competitive. Speak out and be the advocate for our cats and teach and share with the exhibitors that come to you for your opinion. But always remember to enjoy your time with these beautiful animals.

I have taken up a new hobby. I am teaching myself to knit. I am currently learning on woolen socks. My mom and my aunts were master seamstresses and also crocheted and knitted. I’m following their lead in their memory. 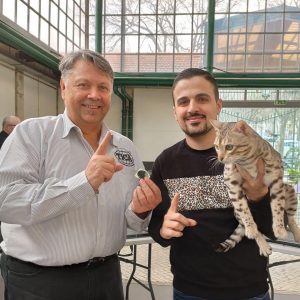 Thank you for this wonderful conversation. I hope all these questions haven’t been too tedious for you. I have to admit that I have had a great time, just as I’m sure our readers will. I wish you and your family, above all, good health, and I hope to see you soon in Belgrade at one of the next exhibitions.

We are Felis Serbica Cat Club from Serbia and this online magazine is our idea how to meet TICA people all around the world.